"See the Great Bear? She is always there in the sky, hunting to feed her cubs. Unlike the other stars, she never touches the ocean."

"At the dawn of time the Titans created many birds and beasts to live in the lands of Thylea but all the waters of the oceans remained empty. Only the Great Bear swam in the rivers and lakes. The Mother Godess came to her and said 'Great Bear, you are the wisest of the land-walkers, so I will grant you a boon. I will fill the oceans with creatures, strange and colourful, and you will have dominion over them.  Would this please you?'

The Great Bear was quiet for some time until the Goddess prompted her to speak. Finally, the Bear said 'Mother Goddess, I am humbled by your generosity.  The creatures you speak of sound marvellous, but I love the lands and rivers and lakes too much to leave them for the seas.' The Mother Goddess understood. She smiled, and with a wave of her hands, all the rivers and lakes of Thylea were filled with glittering fish, so that the Great Bear would never want for food.  To this day she loves to swim in the rivers, catching fish. But she has never touched the ocean." 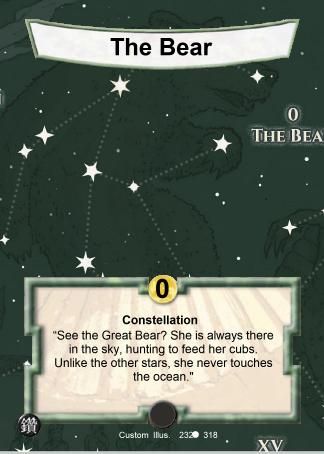 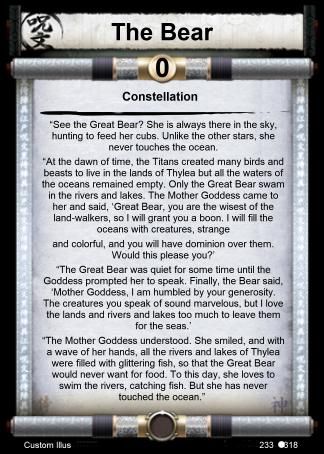