Real-Time Eberron: Jade Foxes and Beyond
Your Campaigns

Remove these ads by logging in. 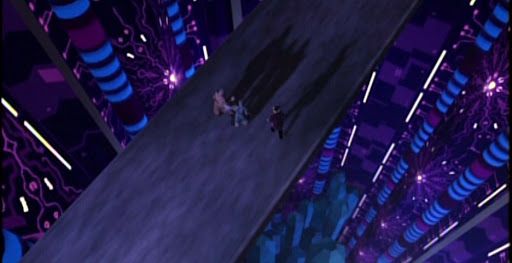 Continuing on from their meeting with Lucian Weaver  (JF18. Exploring Cinderwatch), the Jade Foxes found themselves in a long corridor with several alcoves, each of which contained a dragonborn skeleton wielding a glaive.  Heading into the corridor, the Jade Foxes were surprised by an arcane sigil activating which sent a giant ball of ice down the corridor, before it disappeared in a dimension door at the other end, reappearing at the start.  While Canton attempted to deactivate the arcane sigil, the rest of the party set to work on taking on the skeletons.  Rahl Morninglow was taken out and rendered unconscious, but fortunately Sarran was able to revive him just before the ball of ice was about to hit him.  Finally Canton was able to deactivate the arcane sigil and stop the ball of ice, and Kraxor Tyraneroth easily despatched the last of the skeletons.

They rested; Lucian Weaver was struggling with frostbite on two of his fingers; Canton cut them off to save him.  In the next room they found a humongous door with a small altar in front of it; the altar had three egg-shaped recesses in it.  Lucian Weaver was immediately drawn to the door, an stayed there while the Jade Foxes investigated the rest of the facility.  The first door they tried led to a small cell, with a strange hovering ball of arcane energy in it; Canton cast a spell on it to see what would happen, and was immediately pulled in.  The rest tried to help him, but were pulled in as well.

Canton found himself in a wide ice plain, with a strange starscape above him.  In front of him was a large undead beholder, and behind the creature could be seen a glint of gold embedded in the ice.  The Jade Foxes soon arrived, and attacked the beholder while Rahl Morninglow phase-stepped to the glint, which he discerned was a golden egg.  While he dug that out of the ice, Canton panicked and leapt back through the portal.  On arriving at the cell, he realised his mistake and returned to the fight.  Sarran used Turn Undead to scare the beholder off, at which point the party were able to return to safety.

The next room led to a large chess-board, and an instruction to place eight queens on the board so that none could capture another.  After struggling for some time with the puzzle, in the end Rahl Morninglow used a crowbar to open a door in the wall and get a second egg.  The third egg was in an empty chamber; whatever was protecting it had long-since died.

Putting all three eggs in the recesses in the altar, the door opened and revealed the largest chamber any of the Jade Foxes had ever seen.  It was a large circular chamber filled with strange pulsing lights, and at the centre was a strange machine, accessible by a bridge from the doorway where they stood.  As they got closer, the Jade Foxes saw that there was a figure embedded into the machine.  An illusion appeared before them, which was missing two fingers - the same two that Canton had cut off Lucian Weaver.  The figure explained that he was the older Lucian Weaver; he was the guardian of this Dimensional Seal.  This part of Q'Barra was a Manifest Zone that connected Eberron to the ice plain of Risia, and the Dimensional Seal was the only thing that stopped the two plains from merging.  However the Dimensional Seal was tied to Lucian Weaver's lifeforce; as he was dying, he had reached out to his younger self to 'complete the circle' and take his place as the guardian.  The elder Lucian Weaver also explained the Path of Waves had been founded to protect this place from those that would use it's power for evil.

Realising that the failing Dimensional Seal was the cause of the problem with the local dragonborn, the Jade Foxes agreed to let Lucian Weaver stay, even though it would mean failing their contract.  They returned to Cinderwatch and boarded the Moonbeam.  Eckbert Kanrei invited them into his cabin to reveal his true self and agenda; he was in fact Malkov, a member of the Dark Lanterns.  He was investigating Lucian Weaver because he was being financially backed by Boras d'Cannith.  The Dark Lanterns believed that Boras d'Cannith was funding several archaeological digs in an attempt to find a weapon of some kind.  Malkov was satisfied that Lucian Weaver had not uncovered anything that would be useful to Boras d'Cannith, so concluded the mission was successfully completed.

The Jade Foxes returned to Sharn on the Moonbeam.  Rahl Morninglow spent some time on the return voyage in Captain Half-Tooth's cabin.

A web of interlocking quests can be built using the Parent Quest field.