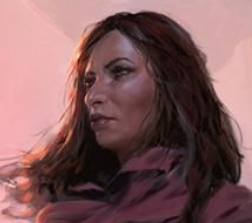 Kaarina Ill Bearhaven, maiden name Ternsun, was born the 13th of Eternmas 48BA. She was the third born sibling out of seven, having had five other sisters and one brother. The Ternsun's held land over gem mines near the border of Ri'En and Quell which had long ago mostly dried up, leaving the noble family with little value. Her family struggled to find marriages for their children, and to compensate Kaarina sought and mastered as many talents as she could to attract a husband. She was renowned for her sharp wit and intellect, as well as musical talent, but struggled to find a husband still.

As Roysen's wife, Kaarina led many social engagements at the Bearhaven estate and managed the great hunts her husband and others took part in. She was known as an excellent host and barely flinched when in 6BA her daughter was said to have been mauled by wild animals, nor did she seem distrubed by her daughter's sudden reappearence nearly five years later in 1BA, now as a tiefling.

During 0ÆR, war broke out between Quell and Ri'En. Roysen and his brother Arden were enlisted to join the fight. Roysen was later found dead in his bed on the 2nd Tildus of Sunmas, reportedly by a rogue infiltration of Quellians, while Arden disappeared.

After her husband's death, Kaarina took over as head of the now empty Bearhaven house and became devoutly religious to the new All-God Ævar. After Ævar's an increasingly destitute Kaarina sold her noble holdings and moved to Cerebon.

In 1AR during Eternmas she went to visit her now High Priestess daughter in Alysium. After leaving, she was never seen again and is presumed dead.