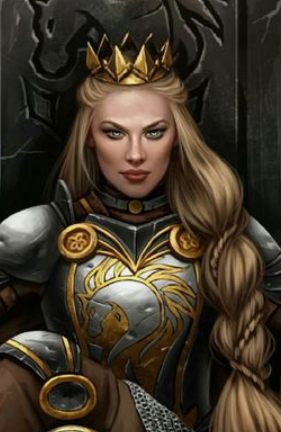 Queen Katraine Rivvermont is the current Queen and founding monarch of the Kingdom of Ri'En. Katraine was born on the Night of Silence of Bloodmas in 3241BA as Princess to the then Kingdom of Arimore. As the eldest daughter, Katraine was not made heir of Arimore, though rejected the usual role a Princess was supposed to abide by, training tirelessly in the art of combat and taking to adventuring thoroughout Arimore. She returned when her brother, King Benedyn Varconlis offered her a legion of the army to command, on the condition that she marry.

Katraine resonded by marrying a knight that would be under her command, Frendrel Rivvermont, who reportedly took her name despite tradition.

Katraine continued to train and led her own legion of the army, leading them into battle to expand Arimore's territory as her father did before her with great success, expanding Arimore's land to the south-east.

Uncontent with the recognition and power she received for her efforts, Katraine made an alliance with the Dwarves of Arimore, promising to give them control of the dwarven promised land. With their support she claimed the land for herself, naming it Ri'En and declaring it to be its own independent kingdom in 3215BA, issuing the construction of Cerebon Castle.

Despite her brother's efforts to reclaim the territory in the following 5 year war, Katraine's hold held firm on the land and the two signed a truce and trade deal between the two kingdoms in 3209BA.

Her kingdom now secured, Katraine set about improving it over the next five years. However, the towns she established were reportedly routinely set on by dragons. In response, Queen Katraine ordered the death of all dragons on sight, actively hunting them down and leading the charge despite reportedly being pregnant with her eldest son, Rillian.

Later in 3197BA her eradictation of dragons extended to all dragonborns, which made up a large portion of the remaining native people of the land she had conquered and opposed her eradication of the dragons. Both she and the leader of the dragonborns, Livjatan, reportedly perished on the front line on Dusk's Way 3195BA, with the culling of dragonborns ending with her reign.

However, Katraine returned thousands of years later on the First Soldus of Firewax 1AR, having reportedly been in a petrified state all those years. Seeing what had become of her Kingdom, and with renewed support of the Dwarves, Katraine started what has become known as the Rivvermont Revolution.

Katraine set about freeing the people from the labour camps they had been consigned to under King Byron Horncloak's reign. Those she freed joined her cause, rallying into a people's army, which began to sweep across Ri'En.

Queen Katraine regained her kingdom and throne on the 1st Thordus of Nightwax 1AR when she led a sudden assault on Cerebon Castle, overwhelming Byron Horncloak's defences and killing him herself. Katraine took her only surviving descendant, Prince Alexios "The Mad Prince" Rivvermont as her ward. Her reign saw the end of the city entrance tax and all labour camps throughout Ri'En, as well as the reintroduction of the eradication of dragonborns and the death penalty.

Note: There is some discrepency surrounding the origin of Katraine's surname name Rivvermont, as records are sparce prior to Katraine's rule as monarch of Ri'En, those held afterwards indicate the Arimorean monarchs held the name Varconlis. It is possible that Katraine chose a new name to distinguish herself and her line of descendants from those of the Arimorean monarchy.