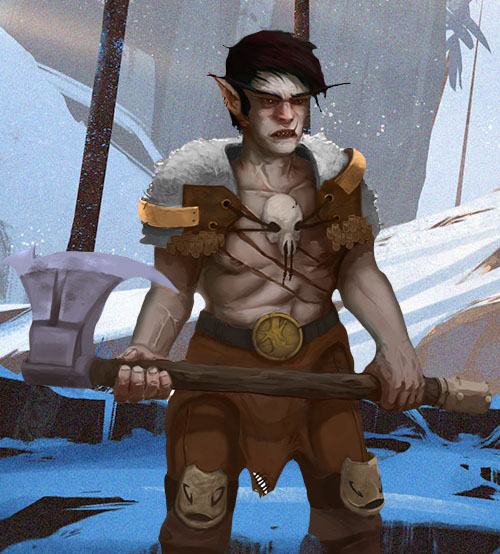 In the early days of the Sentran Empire after numerous wars against the Orcs, the Empire set its sight on the rich agrarian lands of the gnomes.  At first, fairly even trades were made between humans and gnomes as the Imperial forces were still stretched thin and worn from their previous wars. In exchange for some of their land, the gnomes were given various gifts, and they moved north to new lands.

But throughout the next hundred years, the deals became less equitable and more in the Empire's favor and the gnomes found themselves pushed further and further north, until they were forcibly resettled by the imperial army in the icy lands of the north.

Once a jovial race, the cold gnomish lands has made them more grim, but not humorless. Efficiency in word and deed is crucial to survival in the harsh arctic realms, so arctic creatures tend to get straight to the point in conversation, and they have little patience for those who speak in riddles or half truths. Because they must struggle for even the most basic existence in the severe climate of the arctic regions, excess of any kind is offensive to them. Thus, they tend to be frugal and to value hard work for the benefit of all over individual accomplishment.

To a gnome, being alive is a wonderful thing. Their lives are difficult, but they attempt to squeeze every ounce of enjoyment out of it.

Gnomes must exert themselves merely to survive in the bitter climate of their homelands, so they tend to make ideal adventurers. Those who dislike the constant struggle of life in the arctic often travel far from their homes in search of comfort, if not adventure. Occasionally, the arctic tribes send emissaries into temperate lands to gather aid against particularly strong enemies or to secure emergency stores during hard times.

Gnomes are short, standing about 3 to 3 1/2 feet tall. Their skin ranges from light tan to pale gray, their hair can be any human color as well as shades of green and blue, and their eyes can be any shade of blue. Gnome males prefer short, carefully trimmed beards, and take great care in grooming their large eye brows. Gnomes generally wear clothing to blend in with their surroundings, and multiple layers as a protection against the cold. They decorate their clothes with intricate stitching.

This entity is mentioned in 3 elements. View details.