Dashboard Shadows of the Dominion The home for your creativity 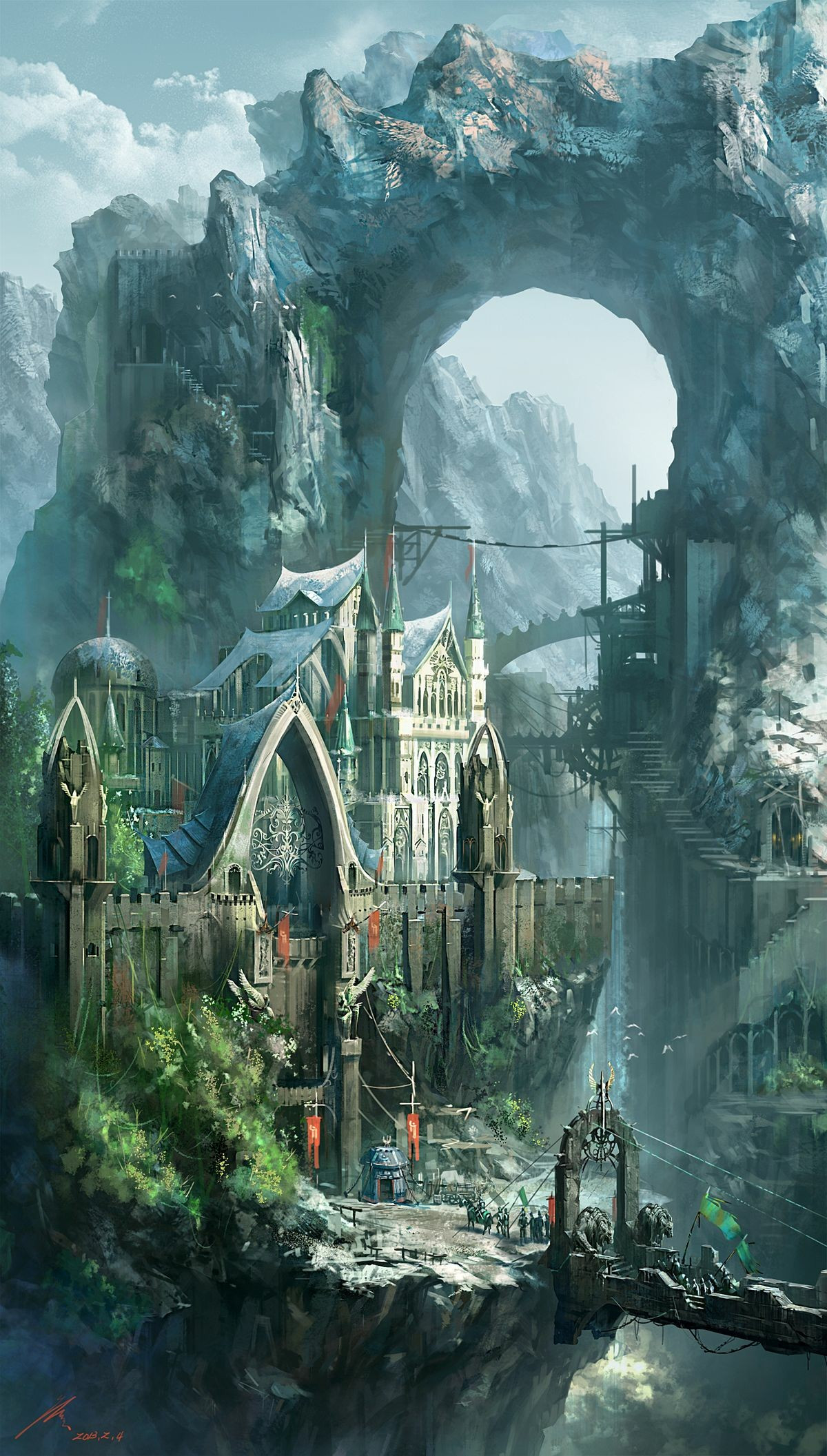 Shadows of the Dominion

Shard was a high magic World once, with Mages being able to devastate entire cities with a simple spell, bring back the dead, summon demons to do their bidding and the like. To end the Mage Wars a circle of powerful spellcasters locked the higher levels of Magick, forsaking much of their power to cripple the warlords that were threatening to destroy Shard forever.
A few decades ago the Seals that had once blocked the access to the higher spheres of magic have broken and magic flowed back into the world.

Galvania City is often called the Gem of the Northern Deserts. The City lies next to a the coast of Sultans Lake where the River leaves it on order to cross the desert that also carries the Cities name. The Colleges of Magick in the city are renown across the entire world. The City is ruled by a council of 9 houses, although the head of the 10th ruling house - The Sultan - is the true seat of power. No sultan can survive without the goodwill of the other houses though, so the word of the council cannot be ignored.

If you ever visit this great city do not leave the safety of the Hahroftan District unless you are invited into the other wards. And do try not to get pulled into the the machinations between the houses, unless you really want to delve into this political nightmare, against better judgement. Its Players have played this game it for centuries and most who think they play it are merely pawns that can be sacrificed for one's gain.

Galvania lies at the western coast of the northern continent bordering <insert neighbours>. Most of the Country is a scorching desert that seems to go on and on forever. Most of Galvanias population lives near the Sultans Lake and the River Gal, a wide slow stream that flows within a small green band across the desert.

The Country is clearly dominated by the City of Galvania itself. A huge maze of wards and towers at the shores of the Sultans Lake that holds nearly 50 000 free citizens and at least Fifteen times that number in unfree citizens and slaves. While the city is full of marvels and one of the most influential places of Magic on Shard, it is also home to some of the worst political intrigues. The Nine High Houses struggle for more power over the Sultan while the lower Houses always plot the demise of one of the high houses in order to raise to true power for themselves.
Galvania City is home to the Sultans Palace. From here the country is ruled and controlled. Protected by both the Phoenix Guard and the Black Dragons it is both a nigh impenetrable Fortress within the City and one of the most marvellous palaces in the World. No place in the North has lusher gardens, more luxurious baths or a better stocked wine cellar than the Grand Palace.

Many smaller towns and villages lie along the River but most of Galvanias population outside of the City of Galvania live in the rural towns that tend to the fertile soil near the River. Only few real other cities exist in Galvania, the Port City of Nemzen where the both Black Dragons and the Phoenix Guard have their main garrisons and train their members being the most notable.

The Vast deserts of Galvania are barely populated, other by the various Nomadic tribes that roam the routes from oasis to oasis. There are several strongholds that keep the trade routes, save but no major settlements are maintained in the desert. This doesn't mean though that there are no cities between the galvanian Sands. There are several abandoned cities whose ruins still stand against the test of time. One of them is just called the cursed City of Obsidian is built entirely of black crystals and no force known today seems to be able to damage its walls.
Galvanian People
The Galvanian people are taller than their caëlish neighbors and have darker skin tones as well, ranging from light brown from those who hail from the southern parts of the kingdom to the jet black of House T'Korail and other northerners. Many galvanian men sport rather impressive beards. These beards change to whatever is in style this season and are often waxed and trimmed to perfection, if the man sporting them can afford his personal barber. This is true for both nobles and men of common birth since an impressive beard is seen as a a sign of prestige. Even serfs take great pride in their beards although they tend not to be as styled as those of their betters. Slaves are not allowed to wear beards most of the time, as they do not have status. Most slave owners have their slaves shorn and shaved at least once per week.
Galvian clothing very much represents ones status in society. The Members of the Noble houses all dress in expensive fabrics and exquisite jewellery, following both the newest fashion trends as well as their houses culture. Merchants and other free citizens tend to wear more practical clothing, but still show their wealth when selecting what they wear. Slaves on the other hand wear what their masters give them, these might be rags for a lowly worker, seductive silk dresses for a dancer or wide robes of the best quality for a teacher to a wealthy family.
When on the road those who cannot afford a palanquin or a luxurious sandskiff tend to wear typical clothes for desert dwellers: wide, bright fabrics that cover pretty much everything but the eyes.
Galvanian Society

Galvanian Society is based on a hierarchy of power. On top of the Galvanian Society is the Sultan, hated by many for his orcish Blood but so far he seems to have the support of the high houses.
Below the House of the Sultan, there are the nine High Houses of Galvania. They form the ruling body of Galvania and it's their support that keeps the sultan in Power.
Then come the Minor Houses. These are still nobility but most of them are not as powerful as the High Houses. The Minor houses hold many important positions in the upkeep of a country and often provide the local government in smaller settlements for the Galvanian Monarchy.
The Only non-noble people that are free citizens are the Citizens of Galvania City. Not all of them do live within its walls, but all of them have an official passport of the City. The Free citizens are the only non-nobles that have the right to choose where they want to live and what profession they want to follow.
The vast majority of Galvanias citizens are unfree serfs. Not slaves per se (although many of the manual labourers are little more than slaves) but nonetheless owned by a noble house. They make up the major workforce of Galvania, about 50% of the sultanates inhabitants are unfree. Other than slaves they have certain rights, and may have some personal property. They may also appeal to a court of law, even though they tend to be dismissed if their claims are against a noble or a free citizen.
The Bottom 30% of Galvanias people are the Slaves. Most were born to those captured during wars or pressed into indentured servitude. Galvanian Law defines these unfortunate souls as property and not people, so their owner can do with them as they please.

Visitors to Galvania are very dependent on their status. Those who have a Pass from one of the Noble Houses or a Powerful guild, may move about freely in large parts of the country and won't be bothered. They are honoured Guests and treated as such. The easiest way to get a pass is to simply buy one, either forged or official.
Those without a proper pass are in constant danger to be simply claimed by a Noble as their property and pressed into servitude, although few will refuse to accept a substantial bribe to buy back ones freedom.

Located near the borders between Galvania, Caël and Zuhl this oasis is one of the most important stops for caravans wishing to cross the galvanian desert. Well Protected behind 15 feet walls,the Oasis is a save trade hub between the three kingdoms, and several trading houses have set up outposts here in the middle of the desert. Most traders from Caël or Zuhl don't even travel further than the crossroads, instead preferring to exchange their goods and coins here, and taking the journey back home.
The wall encircles an area of around 200 times 250 yards, surrounding the small lake that is filled by an underground well. Most permanent buildings were built east of the lake, where the wall is the closest. The southern part of the oasis is reserved for the tents and camels of passing caravans and in the northwestern part a small farm provides some food for the local population.

The only inn of the Oasis, the laughing camel is the place to stay for those not wishing to stay in a tent or with relations to one of the local tradeposts. The rooms are small but clean, the food is simple but well prepared and the prices are reasonable. The Inn is located left of the main gate at the easternmost end of Crossroads Oasis in a one story building. Left of the large common room there is a small kitchen, although all the fireplace are located outdoors to keep the temperatures in the room as cool as possible. To the right the eight guest rooms are located, as well as the private rooms of Arear al-Aath, the Inns Owner, and his family.

Years after the Binding