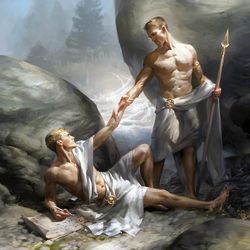 Conditions alter a creature’s capabilities in a variety of ways and can arise as a result of a spell, a class feature, a monster’s Attack, or other Effect. Most conditions, such as blinded, are impairments, but a few, such as invisible, can be advantageous. A condition lasts either until it is countered (the prone condition is countered by standing up, for example) or for a Duration specified by the Effect that imposed the condition. If multiple Effects impose the same condition on a creature, each instance of the condition has its own Duration, but the condition’s Effects don’t get worse. A creature either has a condition or doesn’t.