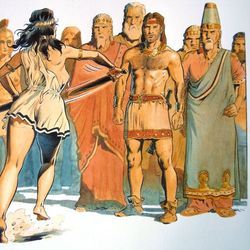 Humanoids are the main peoples of the D&D world, both civilized and savage, including humans and a tremendous variety of other species. They have language and culture, few if any innate magical abilities (though most humanoids can learn spellcasting), and a bipedal form. The most common humanoid races are the ones most suitable as player characters: humans, dwarves, elves, and halflings. Almost as numerous but far more savage and brutal, and almost uniformly evil, are the races of goblinoids (goblins, hobgoblins, and bugbears), orcs, gnolls, lizardfolk, and kobolds.