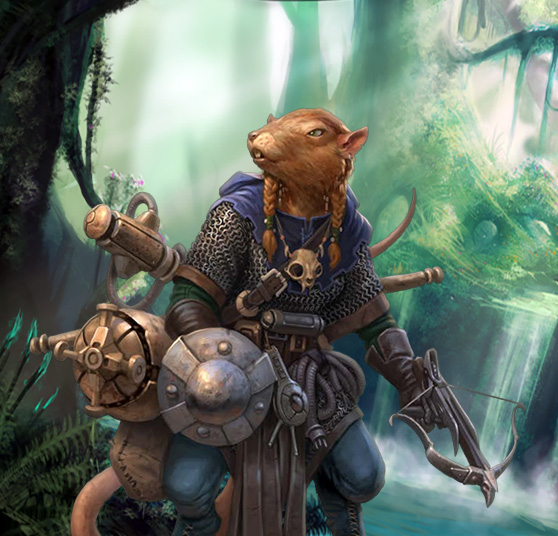 Nezumi are wild, fierce, and primitive. Yet they are also storytellers, families, and friends. They live close to nature in tribes led by wise shamans, never taking more than what they feel they need. They are rarely found in cities, but young Nezumi have been known to travel with a desire to see the world, like many others.

Nezumi, more commonly known as ratlings outside their tribes, look like nothing so much as humanoid rats. They stand upright, although they are shorter than humans. They have long snouts, pink ears, and pronounced incisors, like ordinary rodents. Their bodies are covered with rough fur, ranging in shade from white through gray and brown to black, sometimes solid and sometimes patterned. Fur patterns tend to run in ratling families.

Nezumi live in the hills and mountains east of the Empire in small agrarian villages. They are semi-nomadic, moving from one fixed place to another with the seasons. Their dwellings can be dismantled and moved in hours. As the Empire has moved its borders, Nezumi move as well, typically staying close enough for trade but not within the Empire’s boundaries. Nezumi worship the spirits of the world around them, believing in a connection between this world and the Spirit World.

Although friendly with the humans, their rat-like appearance tends to cause problems. Most humans, when first seeing a nezumi, immediately jump to conclusions based on the rat animal. Centuries of Sentrans encroaching on Nezumi lands has led to strained relations between the two races.

Younger nezumi are quick to adapt and mimic the culture of other races. However, their idea of the culture may be inaccurate, and lead to unflattering results.

Small Frame: The creature is less durable than most. Reduce its Toughness by 1.

Immune to Disease: Nezumi have a hardy immune system that makes them immune to most disease.

Keen Scent - Notice: Nezumi get a +2 bonus to Notice rolls when using their keen sense of smell.

Rat-like: Nezumi's rat-like appearance tends to cause problems. Most people, when first seeing a nezumi, immediately jump to conclusions based on the rat animal. Nezumi subtract 2 from Persuasion rolls with all but others of their kind.

Commune with Nature: Through the spirits, Nezumi can communicate with animals Size 0 or smaller. They receive the equivalent of the Beast Master Edge, but without a loyal animal companion.

This entity is mentioned in 10 elements. View details.