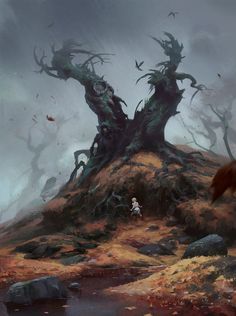 In SE 5003, the first major disaster in untold ages struck the basket region; trees, shrubs, crops, vegetation of all sort began to wilt and wither.

At first regarded as a seasonal mishap, Ogronnios being the coldest month of the year, this unfortunate incident did not stop- the withering only grew worse. Now trees are scarce, and there are few bushes left in the wild.

While there is still enough arable land to meet needs in the basket for now, it has been a constant concern. Every year the Landblight seems to claim more and more formerly fertile land.