With the baron granting them party access to a small manned riverboat for the purposes of 'reclaiming' Redwood Castle, the party hired themselves a peasant to stand at the trapdoor they found last expedition, armed with a horn to alert them to any trouble above ground. Their journey to the castle was calm, with only a distant thin wisp of smoke to the east being of note.

The party rappelled down into the depths again and returned to the room with the de-helmed statue - a winged woman holding aloft a marble two-handed sword - where Crane and Dulo investigated / prodded / speculated while the others examined the two blocked passages out. A prematurely-snuffed-out Read Magic spell indicated that the runes carved into the walls absorbed nearby arcane magic. The pair wondered about bringing some equipment down in future to try and extract these runes intact, as well as the logistics of getting this statue outside and to a potential buyer. 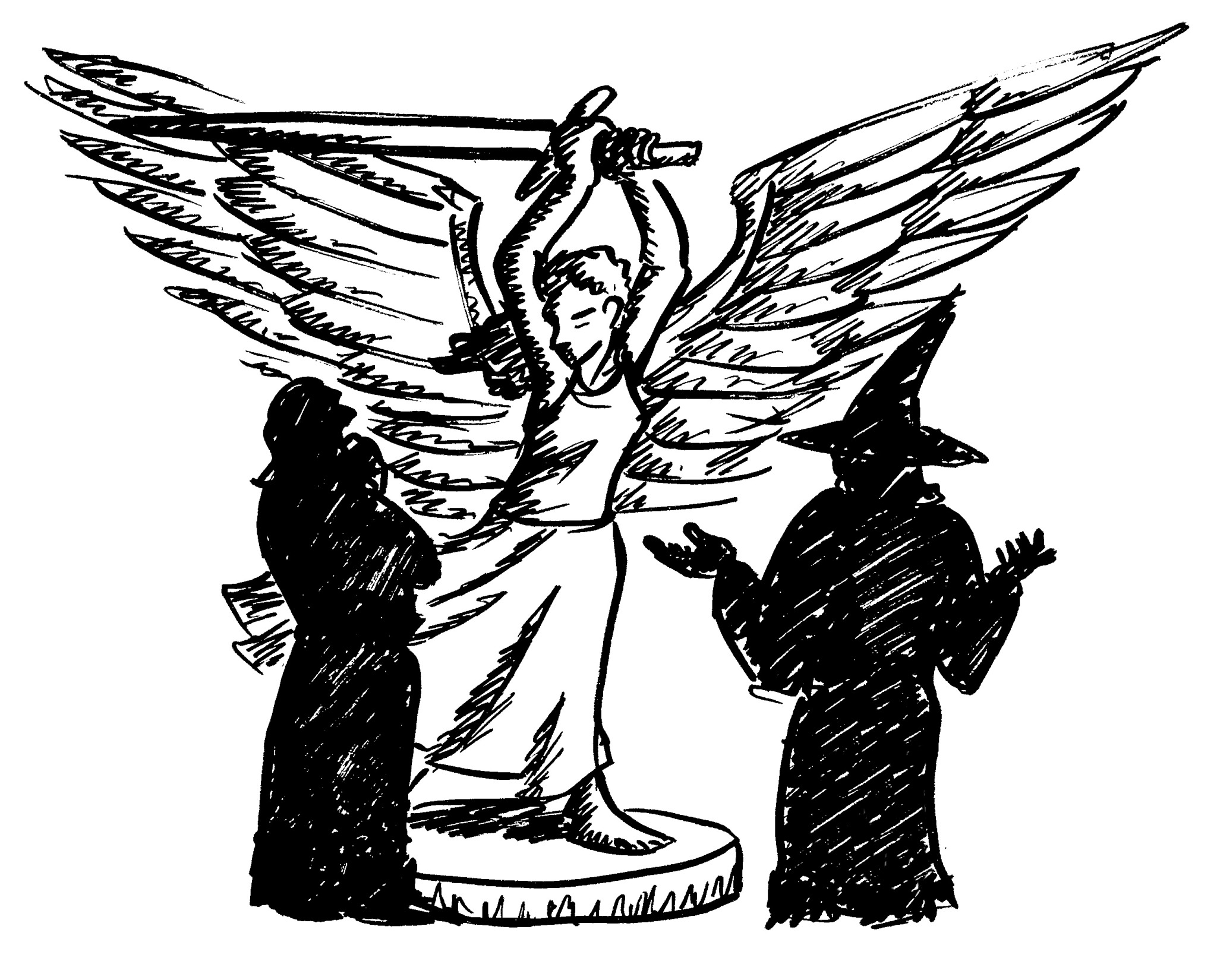 The other adventurers determined that the collapsed passageway might be cleared with some shovels and time, but for the time being focused their attentions on the other corridor obstructed by a portcullis. An old winch was just about visible. Yello raised his bow and instructed the small-but-mighty Oswick to stand ready. Remarkably, the thief's arrow struck the ancient mechanism and turned it just enough to raise the portcullis a fraction, and that was all that was needed for the muscular halfing to heft the iron bars all the way up.

A new cavern lay beyond with a simple door to the left, a passageway to the right and a great set of brass double doors ahead. The keener-eared adventurers listened and determined there were at least two murmuring voices on the other side, though the language was unknown. The other party members, standing further back, spotted the torchlight reflecting off several objects floating in the air in the passageway on the right. A closer glance revealed them to be gems and armour. A wary shot at them added a floating crossbow bolt to the mix.

Oswick tentatively prodded with his sword, and felt a gooey mass press against his raised shield. He flung himself back while everyone else tried to pepper this wobbly mass with missile fire. As the thing kept advancing and overwhelmed first Hats and then Martixa, Dulo instead tried some real fire, lighting a wall of oily flames in front of it. It oozed over the flames and, continually hacked and shot at by the party, finally lost its form and gloopily deposited its contents - including the two retainers - onto the ground. 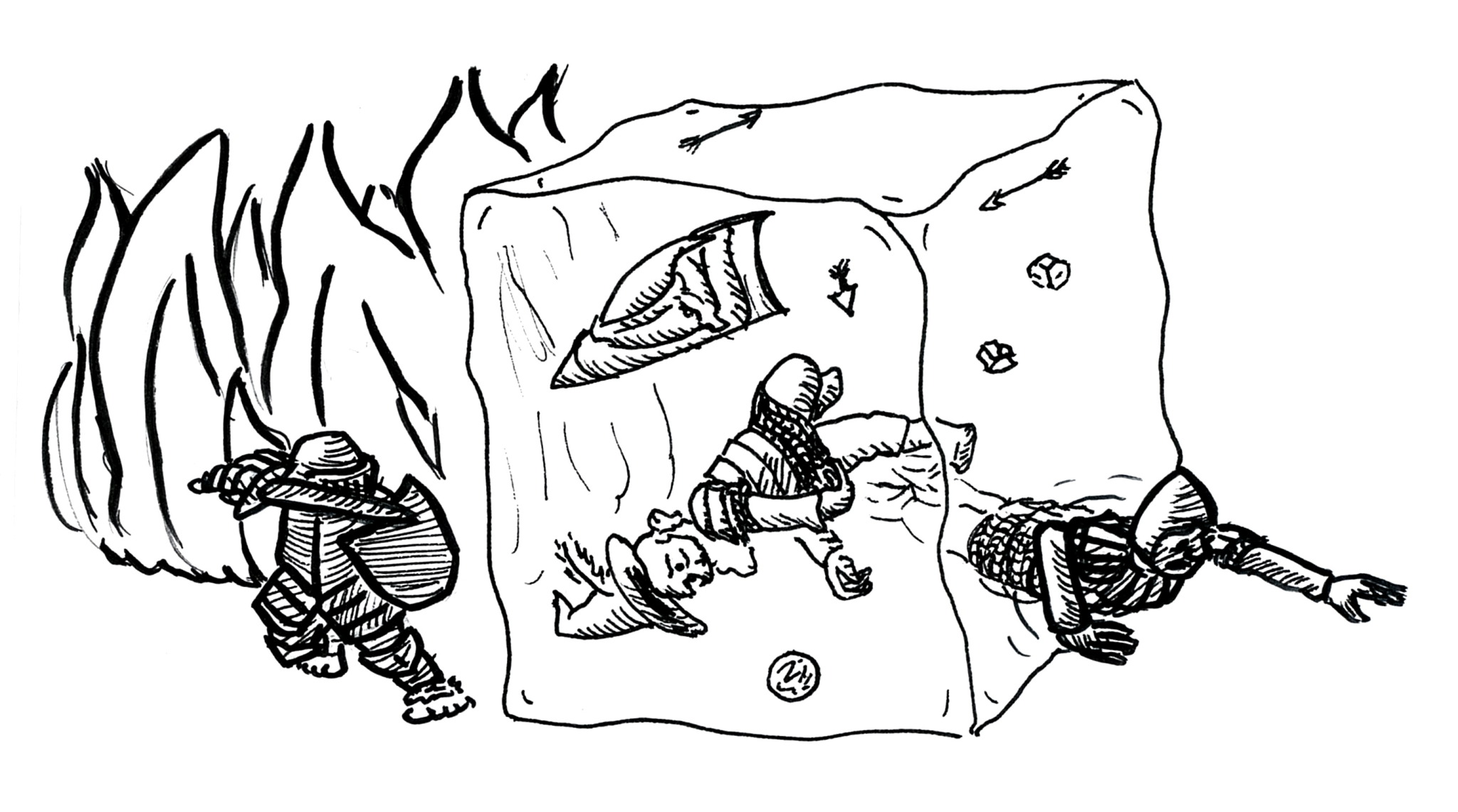 Hats and Martixa both lay unconscious but (just about) alive. They lay amongst a pair of large gems, a shield bearing the relief image of a rhino's head and a translucent ball. Crane picked it up and a skeletal visage framed by a great fur cloak stared out back at him. It uttered a single word directly into his head: "Flee."

Having not heard anything, the rest of the party watched bemused as the magic user dashed out of the room into the pitch black. Collecting the other treasures and dragging their limp retainers behind them, they shuffled after him. The sound of whimpering, then manic laughter and rattling chains emerged from the passage behind them and echoed all around. They picked up the pace and fled up the rope to join Crane back with the ferryman.

Back at the town of Redwood, the party sought out Andrella to identify the rhino-faced shield, but having scorned her and made dealings with the baron they found themselves having to pay for the privilege. The shield itself would enhance a wielder charging into the fray.

Crane kept the translucent ball secretly wrapped up in a cloth.