Their pockets bulging from some decent discoveries in Redwood Castle, the party recruited and equipped a pair of fresh adventurers, Father Fryd and Dulo Chaec, and hired themselves an extra retainer (a fighter, Martixa).Confident in strength of numbers, they set off upriver again, disturbed only to the extent of needing to evade a group of enormous beetles.

Their approach to the castle was less tranquil. An arrow flew at Tarek from one of the gaps in the wall. He and Hats charged forward while the rest struggled to get a clear shot back at the assailant. Hats found himself snared by a grasping skeleton trapped beneath the rubble, leaving Tarek to the mercy of the attacker, a feline, scaly humanoid with powerful, wiry limbs. By the time the rest of the party reached them and dispatched the creature, their comrade was dead. 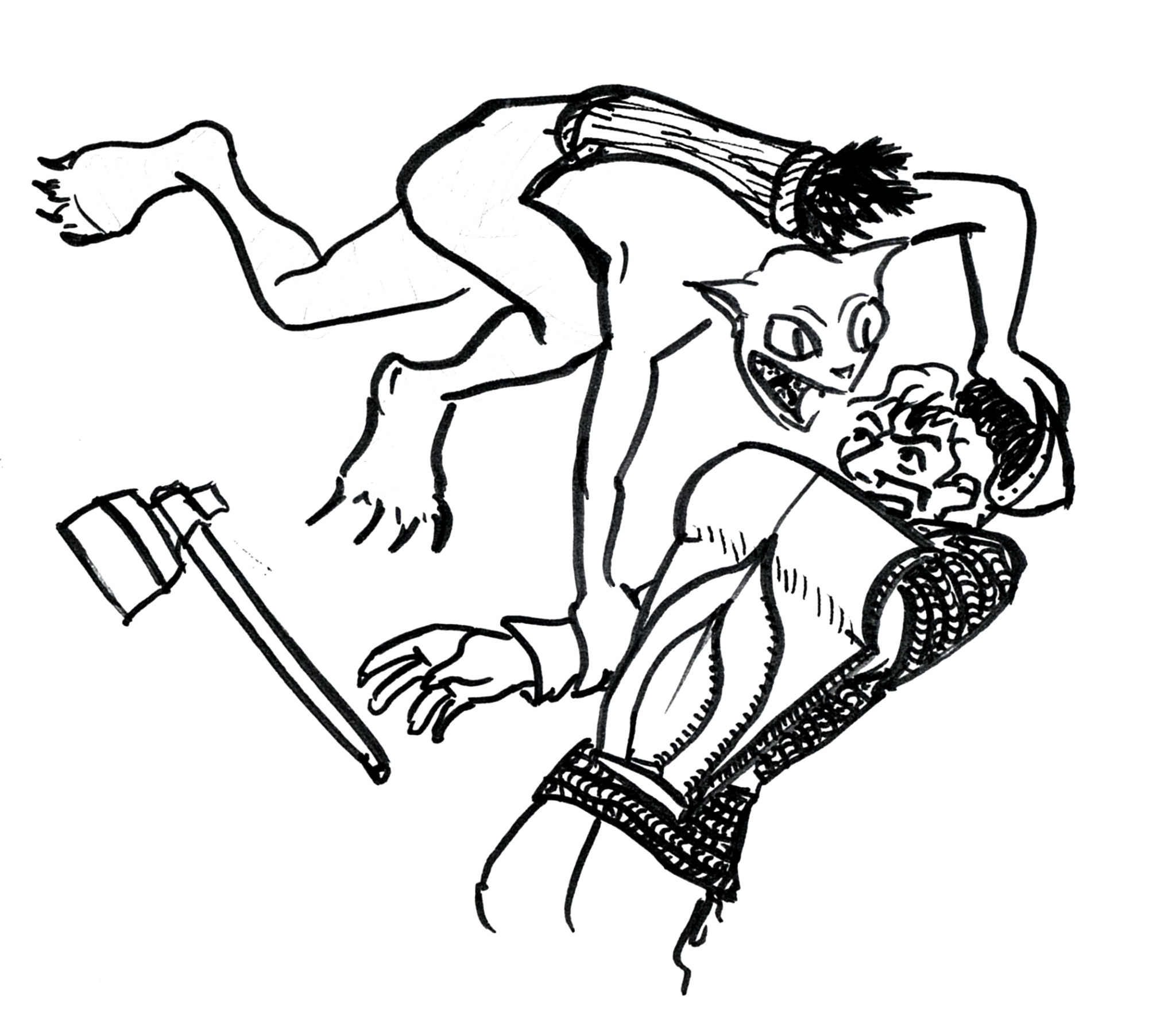 Having pilfered the bodies, the adventurers starting investigating the area around a long-fallen siege tower just outside the castle walls, discovering a trapdoor in the ground just beneath its rotting timbers. Stationing Martixa at the top as sentry, everyone else roped down into the dark.

Creeping around by torchlight, they made their way around a collapsed corridor, past a set of stairs leading upwards and into a glisteningly wet chamber. Here they found a little knee-high passage through which they could see another open space. Electing instead for a more accessible door in another wall, they came across another cavern with a statue stood facing away from them at a partially collapsed corridor, spear raised. As soon as they entered it spun round with a grating of stone on stone and charged.

The party retreated back into the first cavern to better use their numerical advantage, but their opponent’s stony exterior proved tough to crack. Doric darted behind to smash and light a flask of oil upon its back, but then elected to draw his dagger and join the scuffle. The great shield smacked him aside; his broken body slammed against the rocky wall. Father Fryd too fell, his armour crushed and pierced by the mighty stone spear. Despite their losses, the party rallied and hurled themselves at the moving statue, finally bringing it down in pieces. 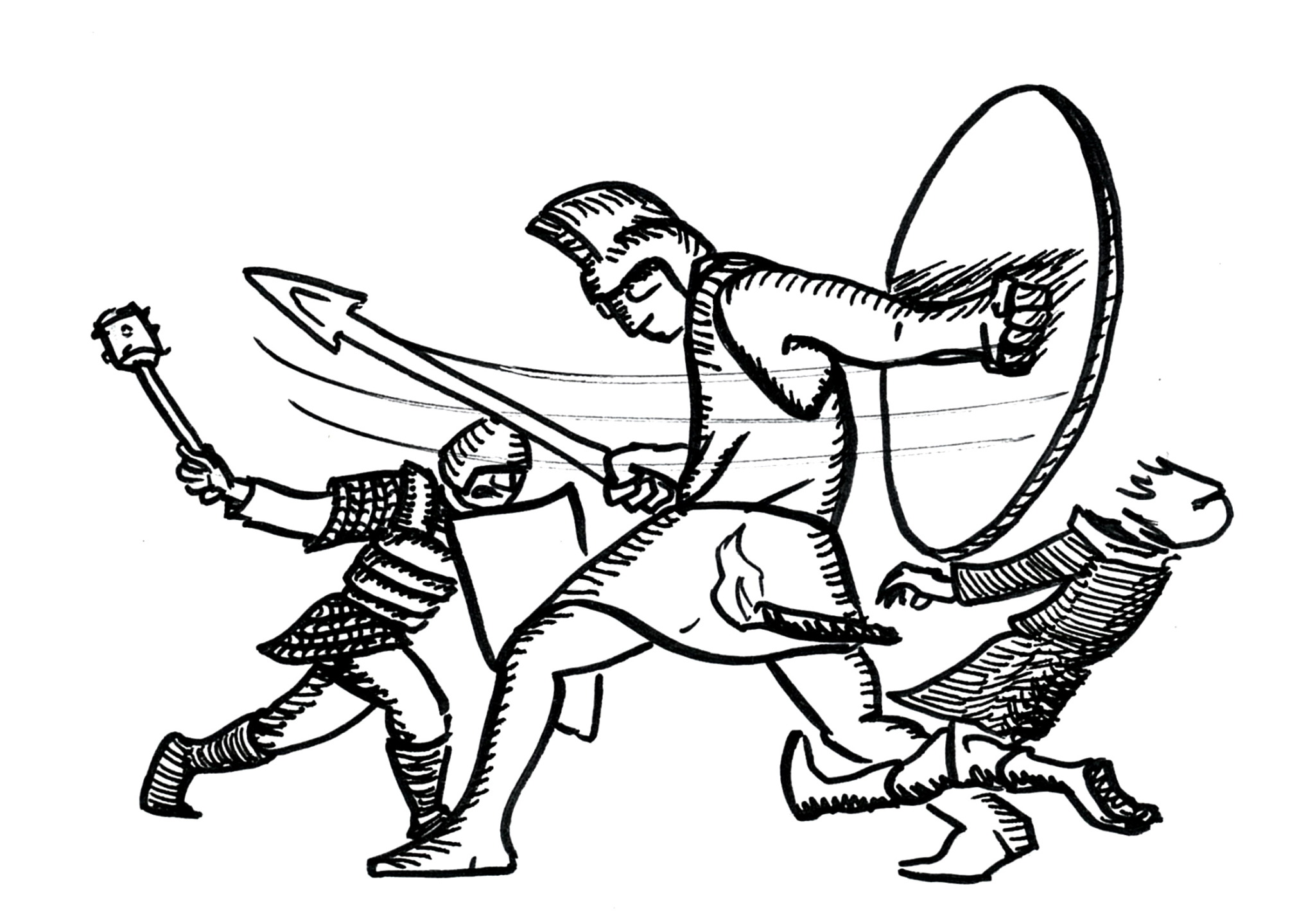 Battered and bloodied, the adventurers crept cautiously into the statue’s room and searched about, finding a collapsed passage and a portcullis across another way out. The other item of interest was another (inanimate) statue of a winged woman adorned with a brass bejewelled helm, two arms holding aloft a great marble sword. Rarder stepped forward and removed the helmet from her head, and the statue brought the sword down in a great sweeping motion. The fighter flung himself aside just in time. That convinced the party to cut their losses and return to Redwood.

They brought the helmet to Andrella but scorned her offer to buy it, believing it possible to get a better price from the baron himself. She was outraged, but the party were indeed able to agree a better deal with her father, earning more gold and the promise to settle the per-expedition fees of retainers hired for the purposes of clearing out the castle.